Here are four of our Torah scrolls in the Ark, including our Holocaust Memorial scroll. 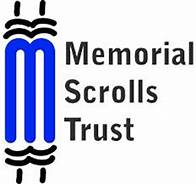 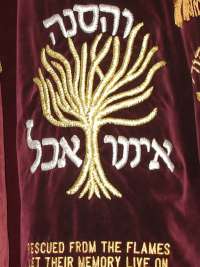 In 1997, Congregation Beth Israel Judea was fortunate to be able to secure on permanent loan, a Torah from the Memorial Scrolls Trust. Placing this scroll in our sanctuary ark was the beginning of fulfilling our promise to use this precious scroll as a holocaust memorial. In August 1998, the congregation completed its sacred vow with the installation of our Shoah Memorial plaque. Centered on our lobby memorial wall, the following words appear:

In memory of the six million Jewish men, women and children who died at the hands of the Nazis. a Czechoslovakian Torah Scroll resides in our synagogue ark. One of 1,564 Torahs looted by the Nazis, our Torah, written in 1850, was taken from the town of Kolodeje, Czechoslovakia.
Once destined to be placed in a museum for an exterminated ethnological group our Torah lives on as a testimonial to the legacy of our people and to the glory of God’s holy name.
A small identifying brass plaque has been placed in the ark in front of the scroll. It reads as follows:
Shoah Memorial Torah

This Sefer Torah, donated by the Confirmation Class of 1997, was written in 1850 and came from the town of Kolodeje, Czechoslovakia. Having survived the Holocaust, it is a living symbol of the Jewish People.
It is our hope that this scroll will serve as a teaching tool and inspiration for our congregants and visitors for generations to come.
Many people have been involved in bringing this project to fruition. Thank you to the following people for your foresight in bringing this scroll to our Temple and your patience regarding completion of this project.
Confirmation Class of 1997
Sheyla Aucar
Sarah Davidson
Gabriel Z. Mass
Eva Mindek Peterson
Andrew Rothman
Jennifer Ullrich
Confirmation Class of 1998
Julia Elena Brown
Michael Dreyfuss
Arkady Glazman
Julia Kislyuk
Leah Loret De Mola
Victor Mezhvinsky
Sarah Pembridge
Abra Pierce
Other sponsors
Selma Dritz
Fuchs-Chesney Family
Hannah & Leonard Greendorfer
Lee & Harry Huberman
Joanne Lehrman
Panzer Family
Stephen & Melanie Talsky
Zuckerberg/Mass Family